What Is The Goldberg Depression Test?

Everyone gets depressed from time to time. We call it feeling blue, down in the dumps, in a funk. In response to certain life events, these emotions can even feel inescapable, what’s known as situational depression or adjustment disorder. But for some people, these feelings go far beyond individual moments and are a serious illness, called major depression or clinical depression. Major depression is a mood disorder in which sadness, frustration, anger and feelings of worthlessness are persistent and interfere with daily life on an ongoing basis.

It can be difficult to know exactly how depressed one is. After all, we’re all sad now and then, how can you tell if it’s something to be concerned about? Fortunately, experts have come up with simple tools to help point the right direction for people with concerns. These tests screen for the possibility of a depressive episode and advise on whether you might benefit from seeing a mental health professional. This article will highlight some of the criteria used for diagnosis and focus on one online tool in particular, the Goldberg Depression Test.

Note: Depression is a very serious illness. If you think you are depressed, consult with a physician. If you are having suicidal thoughts, reach out to a friend or loved one right away. 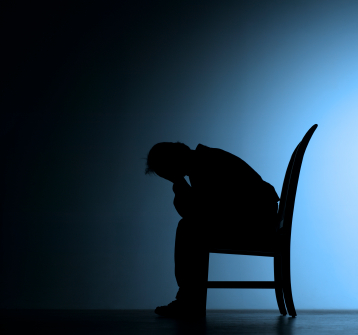 You can also call a suicide hotline number — in the United States, call the National Suicide Prevention Lifeline at 800-273-TALK (800-273-8255) to reach a trained counselor. Make an appointment with a health care provider as soon as possible.

Like pretty much all psychiatric disorders, diagnosis of depression is a tricky business. It can be difficult to parse out what behaviors and symptoms are part of normal life, what are indicators of depression, and what can be indicators of something else entirely. Depression is very frequently accompanied by or mistaken for another health problem. There’s also a strong chance that a depressive episode is part of a bipolar disorder. That’s why it’s so important to have a doctor’s help. They do this kind of thing for a living. They’re way better at it than us.

But the tools doctors use are based on some standard criteria, most often as outlined by the American Psychiatric Association’s Diagnostic and Statistical Manual, the DSM. The criteria for a major depressive episode, with at least 5 occurring nearly every day for more than two weeks, are:

To help get a sense of whether a person displays these criteria, a number of psychiatrists and researchers have created screening tools, questionnaires that pick at some of the indicators of depression so as to raise any yellow or red flags that a patient may need more serious help.

There are at least a dozen such tests that have been developed over the years, and they fall into two basic categories. First there are the tools meant to be administered by a doctor. The most prominent of these are probably the Hamilton Rating Scale for Depression and the Montgomery–Åsberg Depression Rating Scale (MADRS). They tend to be more technical or academic in descriptions, although some have self-administered counterparts.

Then there are the tests designed for self-screening, which have become highly useful and popular since the rise of the Internet. The more popular of these are the Center for Epidemiologic Studies Depression Scale (CES-D), the Wakefield test, and the Beck Depression Inventory. Many of these tests have shown statistical correlation in how they score the subject, meaning they frequently give similar results. Another commonly used and respected test is the Goldberg Depression Test.

Dr. Ivan K. Goldberg was a well-respected and active psychiatrist based in New York City. He was on the staff of the National Institute of Mental Health and the Departments of Psychiatry of the Columbia-Presbyterian Medical Center, and Columbia University’s College of Physicians and Surgeons. He is the author of the book “Questions & Answers About Depression and Its Treatment: A Consultation With a Leading Psychiatrist” and was a practicing physician from the 1960s until he passed away in 2013. He specialized in treating depression and bipolar disorder, with an emphasis on conditions that were persistent even with treatment.

One of the things Goldberg is best known for is the development in 1993 of a simple, self-administered screening test for depression. Formally called the Goldberg Depression Inventory Questionnaire, the test consists of 18 questions that can be taken online to gain immediate feedback on the level of depression a person is experiencing. Published research on the validity of the test found that, while it cannot perform the job of a psychiatrist, it is a suitable instrument for screening depressed people with “reliability and stability,” using a small number of questions that take just about five minutes to answer.

As always with self-assessments, it’s important to emphasize that this is not a substitute for a doctor’s diagnosis, and anyone experiencing concerns about depression should see a physician as soon as possible.

This test simply helps determine if you would likely benefit or need to see a mental health professional. It can also be used as a tool beyond diagnosis to monitor your mood periodically, particularly during treatment for depression. Scoring the quiz will give you one of six assessments based on a numerical scale, describing how significant the signs are and recommending whether the subject should see a doctor.

You can take the online depression test here: http://goldebergdepressiontest.com

Once again, these scores are useful for determining if you should seek a diagnosis, and do not act as a substitute for a doctor’s assistance. If you rank in the top three tiers listed in the Goldberg Test’s scoring rubric, there’s a good chance you should contact a doctor, especially if you score as severely depressed.

Other Uses and Shortcomings

While the test was originally designed as a screening tool, to identify patients who may then be diagnosed as having depression, it can also be useful as a way to monitor mood and progress as one comes to terms with the illness or situational depression. In fact, in a 2005 interview, Goldberg himself described how he employs his own screening tools throughout treatment, in addition to before he ever meets with a patient. His reasoning is that, just as it can be very difficult to ascertain whether one is depressed at all, improvements and variations over time in a diagnosed patient’s condition can be slippery when asking one to self-assess and report back.

As Goldberg put it, if you ask a patient during a check in whether he or she is depressed, the response will often be something like, “Oh I don’t know I still don’t feel very good, I’m still depressed I guess.” But if you instead pose the same series of fixed questions on behavior and objective experience, such as insomnia and weight loss, they have an easier time concentrating and might notice changes they otherwise wouldn’t.

This can have another positive effect, as it provides perspective. Gaining perspective on one’s own state during depression is one of the disorder’s most difficult challenges, as it can always seem like nothing is working. For someone undergoing clinical treatment, the sense that you’re getting professional help and it’s not doing anything, true or not, can be demoralizing and disheartening. By retaking the Goldberg test or another screening instrument, these specific benchmarks can help the patient realize things can get better, causing a virtuous cycle. On the flip side, if the results are stagnant or worsening, a clinician can determine that alternative treatment may be needed.

Even for people not experiencing clinical depression, the use of such a test can provide a helpful snapshot of mood, and help gauge whether a more fleeting set of emotions is worsening or improving, or whether it might be time to see a doctor.

A final word of caution, tools like the Goldberg test are not without their critics, or their shortcomings. While many find them useful and research has backed them up, there have been other studies, for example, that found the use of screening tools has had little or no impact on the recognition or outcome of depression in health care settings. Such screening tools also only go so far in what they can spot, and closely related disorders like bipolar won’t be detected. This is why, during full diagnosis by a clinician, no single tool is used. Instead a combination of several is often required.

The good news is that, while it can be a very serious condition, clinical depression can be treated and managed with time and proper assistance. In addition to pharmaceutical treatments, there is a wide variety of talk therapies, cognitive behavioral therapies, herbal and nutritional treatments, yoga and relaxation techniques, and regular coaching that can bring a patient out of the depths of depression. There is hope and a good future ahead.